For more than 40 years, Grand European Travel has been providing a wonderfully simple, and genuinely personal, way to travel.

Travel confidently with our global team

Situated just north of Panama in Central America, Costa Rica entices tourists with its lush tropical rain forests and sugary fine beaches. Offering exposure to both the Pacific Ocean and Caribbean Sea, the country is uniquely rich in wildlife set against a dramatic backdrop of mountains and volcanoes. If you’re considering a trip to Costa Rica, you’ve come to the right place. Here’s what you need to know.

Packing Essentials
First and foremost, we suggest bringing good walking shoes and a camera or cell phone that takes high quality photos. Costa Rica boasts the greatest density of species anywhere in the world, which means it’s entirely possible to encounter flora or fauna that you’ve never seen before. From amphibians and birds to jungle cats and huge flowering trees, Costa Rica has ecological diversity down. And since you’ll likely spend hours on your feet exploring you’ll want to be as comfortable as possible.

We also recommend packing clothing that can be worn and removed in layers as well as sunscreen, mosquito repellant, and a reusable water bottle. Bear in mind that our Costa Rica tours have a limit of one large suitcase per traveler; make sure not to over pack, bring the right essentials, and you’ll be just fine!

Highlights
There is so much to see and do around Costa Rica.  Highlights that you won’t want to miss include a trip to the Arenal Volcano, Monteverde Cloud Forrest, and Tortuguero National Park. If you’re traveling in the month of July, be sure to set time aside to witness sea turtles as they bury their eggs on a local beach. And speaking of beaches--Guanacaste Beach is the perfect place to wrap up any trip to Costa Rica. After spending a week or more exploring exotic wildlife, visiting active volcanoes and traveling deep into the country's rain forests and jungles, you'll be ready to unwind on one of Central America's most incredible white sand beaches.

Arenal Volcano & National Park
Simply a must visit location on any Costa Rican adventure, this area is featured on every Costa Rican adventure that Grand European Travel offers. The area encompasses close to 30 thousand acres of lush rain forest, beaches, rocky terrain and two volcanoes. Visitors can experience simple, short trail hikes that wind through lava fields and forests with occasional sweeping views of Lake Arenal, which is responsible for a major role in all of Costa Rica’s power production.

While best known for the mighty Arenal Volcano, the park actually features two volcanoes. The smaller 3,740 foot Chato Volcano has been inactive for nearly 3,500 years, but now offers a picturesque look at what happens when an ancient cone collapses and turns into a lagoon. The real gem of the park, however, is the 5,357 foot peak of Arenal Volcano. Noted as the most active volcano in Costa Rica, lava has been moving here since a large scale eruption in 1968! While there have been no explosions since 2010, this could change at any time. Park Rangers monitor activity closely, and may need to close trails around the volcano for safety reasons. In the area surrounding the volcano you’ll find impressive waterfalls, hot springs, and a two mile hike featuring hanging bridges for exploration.

Monteverde Cloud Forest
Another notable stop for every Costa Rican adventurer is a trip to the Monteverde Cloud Forest. A “Cloud Forest” differs from what we are accustomed to in the United States as it occurs in tropical or subtropical environments and features a dense fog or low level cloud cover. The Monteverde cloud forest, which covers about 26,000 acres, contains six ecological zones and incredible biodiversity. Featuring the highest density of orchids anywhere and more than 100 species of animals, 400 species of birds, and 120 reptile/ amphibians species, this is the place to keep your eyes wide open! 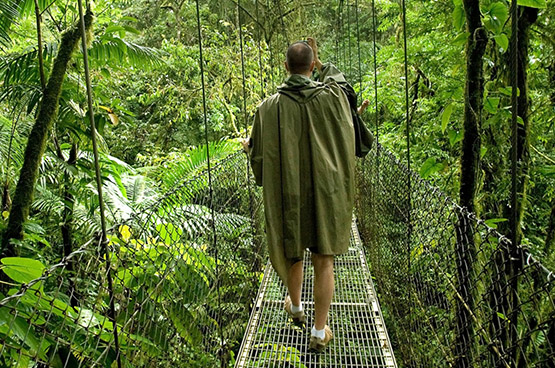 Tortuguero National Park
Located in the Limon province of Costa Rica, this national park is remote; in fact, visitors can only get here by boat or airplane! Here guests will find mountains, rainforests, Mangrove forests, swamps, beaches, and lagoons. The park is very humid and produces a lot of rainfall, so guests will want to dress accordingly. The large park covers more than 77 thousand acres and is prized for its Caribbean coastline- known for being home to nesting sea turtles.

Rincon de la Veija Volcano
This crater volcano can be found in the 30 thousand plus acre national park bearing its name. At 6,217 feet, the volcano stands as one of Costa Rica’s most notable visual icons. The volcano itself is made up of nine craters and has been active since the 1960s. On a typical day visitors can see steam venting, and the rare lava “hiccup.” The park offers a little bit of everything that is great about Costa Rica; dense tropical rain forests and even a dwarf cloud forest. The park is also rich in animal life, with lucky visitors able to spot everything from pumas, jaguars, and sloths to spider and howler monkeys. A series of trails offer many more opportunities for exploration, with one even going all the way up to the volcano’s summit.

Guanacaste Beach
Located in the far northwest corner of Costa Rica, the beaches of the Guanacaste region are renowned. The Pacific surf and sun drenched sands beckon visitors from around the world. Often drier in climate than the rest of the country, Guanacaste provides a pleasant break from the humid rainfall of Costa Rica’s inland provinces. The area features a mix of developed and undeveloped coastline, and the opportunity to spot local wildlife including toucans, monkeys, iguanas, and sloths.

Ready to explore? Our guided tours of Costa Rica capture the people, culture, and diverse ecology of this incredible country. Here’s a look at what some of our best-selling itineraries have to offer.

Popular Guided Tours of Costa Rica
Costa Rica Eco Adventure
The classic eight day trip, this itinerary begins with your arrival into San Jose airport. Next you’ll spend 2 nights in Tortuguero National Park. You’ll also have time to explore nearby Siquirres and the Green Turtle Research Station. The trip continues with stops in Arenal, where you will have time to explore famed Arenal Volcano and nearby relaxing thermal pools. The trip concludes with a two day visit to the Monteverde Cloud Forest. The Eco Adventure is available in both summer and winter, and guests also have the option to extend their trip with a visit to the powdery soft sands of Guanacaste Beach. To learn more about this trip, click here.

Monkeys, Jungles & Volcanos
This eight day trip is geared towards families and focuses on adventures that are appropriate and exciting for a variety of ages and interest levels. Kicking off in San Jose, guests spend two nights at Braulio Carrillo & Tortuguero National Parks. There is time for beach exploration and a visit with local sea turtle experts. If traveling between July and September, families will have the opportunity to see massive sea turtles laying their eggs—a truly once-in-a-lifetime experience! The trip also spends two nights near Arenal with time to explore the Arenal Volcano and visit with local experts. The trip concludes with visits to Arenal National Park for a zip line adventure and beach time as well as Manuel Antonio National Park for animal encounters. To learn more about this trip, click here.

Natural Wonders of Costa Rica
This nine day voyage includes stops in many of Costa Rica’s must see locales. With stops in Arenal to visit Arenal volcano and the Arenal hanging bridges, this is one of just two tours offered by Grand European Travel to stop at Rincon de la Vieja Volacno. The trip also includes time to relax on the beautiful white sands of Carrillo Beach. Finally, guests enjoy a trip through the Los Angeles Cloud Forest. The trip offers ample free time for self-exploration in each major area. Popular activities include rafting, horseback riding, hiking and animal spotting. To learn more about this trip, click here.

For more travel ideas, browse our complete collection of guided tours to Central America and South America. Questions about traveling to Costa Rica on a guided tour? Give our Travel Specialists a call at 1-877-622-9109.