Architecture throughout Russia and Eastern Europe is incredible to behold. Russian buildings offer a taste of Byzantine style along with a use of distinctive brickwork, wood, color, and decorative facades.

Characterized by details used to produce dramatic effects, a notion of wealth and grandeur, Naryshkin Baroque, also called Moscow Baroque, was fashionable in Moscow from the turn of the 17th into the early 18th centuries. Surprisingly though, some of the most opulent displays of architectural prowess that remain are displayed within train stations and underground transit stops across the Eurasian continent. From St. Petersburg to Kiev, and Moscow to Moskva, Russia’s palatial underground is not to be missed.

While Russian train stations are bustling with the real-world business of the 21st century, their transformative facades and patinas cover the walls and are impossible to ignore. Mainly designed after World War II—a time when flamboyance in design was celebrated in Europe and Russia, the building was based on the traditional motifs of the countries where each station still stands today.

Each tells a story, from the marble platforms to the fresco ceilings, the arched entryways, and elaborate light fixtures. All of this was done for show; to enhance the mood of the people in a time when the difficult tone of war loomed largely. In many cases, the paintings on the walls of these Russian stations are in memoriam of military leaders and include coats of arms and even the occasional sculpture of prominent figures. 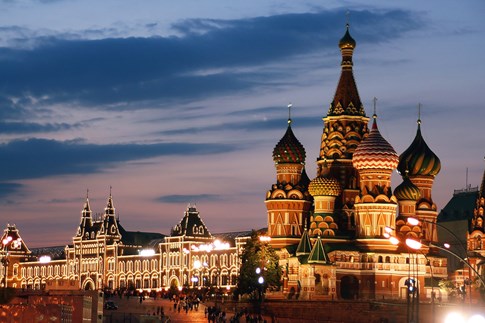 The metro stop at Avtovo in St. Petersburg is an incredible display of Neoclassicism designed by Yevgenii Levinson, complete with marble, paneled pillars, crown molding across the ceilings in various designs, and numerous, immense blue, white, and yellow chandeliers. Avtovo is replete with elaborate glasswork crafted in Lomonosov, Russia—known for its skilled artisans—and where the Red Army fought off the Nazis during the Siege of Leningrad.

Designed by М.V. Vyshnevetsky and built in the mid to late-1800s in the Old English Gothic Style, the Kyiv-Pasazhyrskyi Railway Station sits in the capital city of Ukraine. Later redesigned between the 1920s–1930s using elements of Constructivist and Baroque styles by Verbytskyi, the station boasts an interesting mix of very different architectural interiors. Today, this eclectically designed station serves roughly 200,000 travelers headed to locations both near and far.

Grandiose, wide-open design is the only way to describe the layout of the Koltsevaya Line of the Moscow Metro. As one of Moscow’s busiest hubs, this opulent station is seen by hundreds of thousands of passengers each day. The design of Komsomolskaya has changed throughout the years. Originally architected and designed by Alexey Shchusev as a visual celebration of Russia’s victory over German Nazis, this station contains many post-World War II themes, including a relief of Stalin giving his famous speech of 1941. The station’s style was originally Baroque in the style of the Dutch Golden Age but was later altered to include its now-famous vestibule, cupola, portico, spire, marble Corinthian columns, and Baroque decor, including gargantuan friezes ceilings, and giant chandeliers. The walls of the station are marble mosaic and many feature artworks from around the world.

A pylon station decorated with post-World War II themes such as members of the Red Army’s servicemen, depictions of Lenin, and the cities hardest-hit by battles of the war, Taganskaya Station is a gorgeous dedication. A dozen blue gilded chandeliers, bas-reliefs, ceramic wall tiles, and tin-glazed Italian Renaissance pottery make Moscow's Taganskaya station a spot on the Koltsevaya Line not to be missed.

Get your answers here