The Iconic Colosseum in Rome, Italy

The Iconic Colosseum
in Rome, Italy

When in Rome, it's a must that you visit the ancient Colosseum. To help you get excited, here are some quick facts about why the Colosseum is an important monument, and what it was originally used for.

When Was the Colosseum in Rome Built?

The Colosseum, also called the Flavian Amphitheater, is a large amphitheater in Rome. It was constructed during the reign of the Flavian emperors Vespasian, Titus, and Domitian. Built of little more than sand and concrete, this iconic amphitheater is the largest of its kind ever constructed. A massive undertaking, construction began in 72 AD and took eight years to complete.

What Was the Rome Colosseum Used For?

Part of what drives the interest in this large-scale building is the fact that it has played host to so many vastly different activities. The Colosseum is best known for the gladiator battles that took place in the arena. The amphitheater was also the setting for executions and animal hunts. The famous damnatio ad bestiasepic, executions were even carried out by means of using the wild beasts. Perhaps most interesting, at times the Colosseum was flooded for staged  "sea battles," called Naumachia. The arena has also been used for housing, as a cemetery, a center for artisans and craftsmen, and as a Christian shrine. Today the Colosseum serves primarily as a tourist attraction, though the Roman Catholic Church does host ceremonies there from time to time. 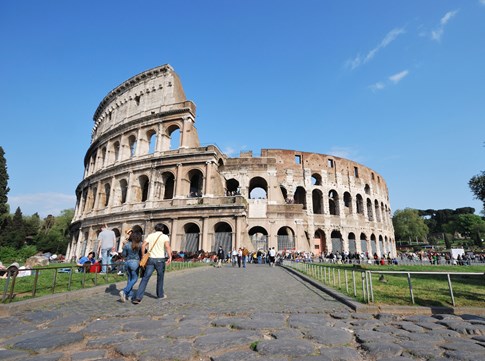 Spending an afternoon exploring the Colosseum and surrounding sites is an absolute must if you're in Rome. Walking up to the monument, there's a sense of awe and wonder, mixed with a bit of horror at all that took place in the amphitheater. Sitting where spectators sat, thousands of years ago, seeing where the animals were led in, and looking down at the maze of subterranean tunnels, you get a real taste of Roman history.

6 Things to Do at the Colosseum

How Many Spectators Can the Rome Colosseum Seat?

The estimated seated capacity is up to 80,000 guests, but a more realistic estimate puts capacity closer to 50,000. Either number is massive and would be considered a gargantuan capacity for its day. It is no surprise that so many otherworldly structures have been modeled after the Colosseum. For example, the exterior of the Vancouver Public Library, the Los Angeles Memorial Colosseum (used in the 1932 and 1984 summer Olympic games), and the Palazzo Della Civilta Italiana in Italy.

What Is the Colosseum in Rome Used for Today?

Over the years many popular musicians, including Elton John, have played near the structure, though not inside. In addition to live performances, the Roman Catholic Church, headquartered in nearby Vatican City, hosts events at the Colosseum a couple of times a year. The most popular event, “The Way of the Cross Procession” is held on Good Friday (the Friday preceding Easter).

Visit Italy and Explore the Colosseum

A must for any trip to Italy, spending an afternoon at the Colosseum is akin to taking a step back in time.

All Italy Vacations
save up to $577

Best of Italy and Sicily

Venice & the Gems of Northern Italy