Don your boots for a Roundup! – Let the Greatest Outdoor Show on Earth take you back to the Wild West. With Daredevil riders an attraction in themselves, there’s plenty more to this global extravaganza that sees eye-popping parades, action-packed chuckwagon racing, and the ‘‘Cowboy Up’’ challenge. Yee-Haw!

What is the Calgary Stampede? 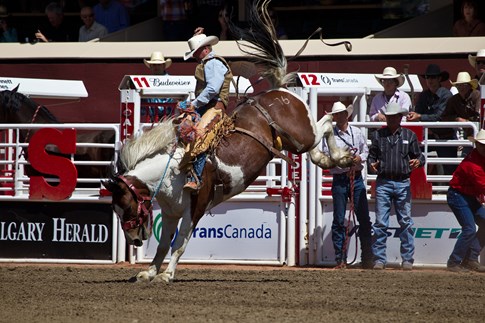 The Calgary Stampede is a gathering place that hosts, educates, and entertains visitors from around the world to preserve and celebrate western heritage, culture, and community spirit.

For just ten days each July, the Wild West comes alive in Calgary, Alberta, Canada. That’s when the Calgary Stampede thunders into town, bringing with it the world’s largest rodeo, spectacular stage shows and concerts, a fun-filled midway, chuckwagon racing, and over one million visitors a year.

The fun begins with a rousing parade featuring dozens of marching bands, over 150 floats, and hundreds of horses. In their red serges, cowboys, First Nations dancers, and the Royal Canadian Mounted Police members are joined by clowns, bands, politicians, and business leaders.

Short History of the Calgary Stampede

The annual event traces its roots back to 1886, when the Calgary and District Agricultural Society held its first fair. In the early 1900s, Guy Weadlick, an American promoter, teamed up with H.C. McMullen, a livestock trader for the Canadian Pacific Railroad, and put together a frontier show tribute to the Old West, complete with cowboy championship, 200 head of Mexican steers, 200 bucking steers, and wild horses. The first Stampede was in 1919 post-WWI, and it became an annual event in 1923 (with a hiatus during the Depression). Today, it’s more than a ten-day-long celebration with midway rides and bucking broncos.

The Stampede Rodeo runs through the entire event and features the world's best competitors and animals. Every afternoon at 1:15 pm, the world’s best and most competitive cowboys, cowgirls, and animals face off in a furious display of skill and grit. Every win takes a rider closer to Showdown Sunday, where they compete for over $2 million in prizes.

Every night, the blast of a klaxon kicks off one of the most thrilling events you may ever see — the chuckwagon races. Four thoroughbred horses race a chuckwagon around a track accompanied by outriders who load a stove and camp poles on the wagon, then complete an eight-point barrel pattern before thundering out onto the track.

In Calgary, nine heats of four chuckwagons each provide excitement that’s off the charts! When the last wagon thunders over the finish line, the Calgary Stampede Grandstand Show begins with elaborate song and dance performances, acrobatics, and a spectacular fireworks finale!

Celebrate an anniversary with an amazing trip

10 Things Not to Miss at the Louvre

The top paintings and sculptures you need to see

Plus everything you need to know about this special designation