Check out our GETAWAY Deals!

Some of the best and most breathtaking art in the world isn’t in any museum or private collection. It’s painted right onto the walls of the world’s metropolitan cities, tucked beneath your feet in metro stations, or even hidden in plain sight. What you might think of as graffiti is an art form that has evolved dramatically since its modern inception in the late 1950s. Urban art is all around the world in some of the least expected places, and most of it is in Europe.

Where Can You Find Urban Art?

Urban art dots the globe and ranges from underwhelming wall scrawling to brilliant and exceptional displays across immense spaces, including building walls, train and metro station walls, and even on the ground. Many international cities are now proud of their extraordinary street art, whether it’s in the most polished parts of town or less refined areas.

The most prodigious street artists the world has ever known are anonymous—and in Europe. The works of some of the best street artists of all time are showcased across Europe in places like Poland, Germany, Belgium, Spain, and all over the UK. While these artists typically remain anonymous, their signature stencil work, use of satire, and one-of-a-kind methods for creating graffiti have made street art in Europe the most highly revered in the world.

There are many parts of Europe where beautifully crafted street art can be enjoyed. You can see some of Europe's more famous street art in Germany, France, England, and Poland. Still, you'll find that, once you start to look for it, you'll notice intricate works in most of the major cities of Europe including Amsterdam, Copenhagen, Barcelona, and Prague, to name a few. Wherever your tour takes you, be sure to ask your guide where you can go to view local European street art because it is everywhere!

There’s plenty of street art to enjoy in London, especially if you get the chance to visit Shoreditch, where Brick Lane is located. A trendy area in London, you can enjoy stunning street art and the chance to enjoy other sights, foods, and any events taking place while you’re there. Banksy’s work is a staple here, but there are many other incredible up-and-coming artists making their mark in Shoreditch, which is very close to Liverpool Street and easily accessible.

Best Places to Visit in the United Kingdom

If your vacation takes you to Paris, the art that dots the streets of this metropolis is not to be missed. In all of Paris, the most important place to get to for street art is the 13th arrondissement: the “district of tapestries,” nestled between the Seine and the Left Bank. Known for its large Asian population, ethnic eateries, and the Paris Rive Gauche—an up-and-coming business district—the 13th arrondissement is an eclectic and vivacious area anyone will enjoy. While visiting the 13th arrondissement to view street art, you’ll definitely want to drop by the National Library of France—this is the national repository for all French publications, much like the Library of Congress in the U.S. 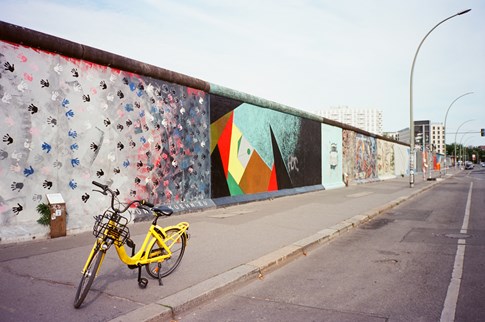 World-renowned for the incredible street art of Berlin, the graffiti scene in Germany is alive and kicking. For a glimpse at some of the most moving and important non-traditional art in Germany, check out Berlins East Side Gallery—a misnomer for the remaining portion of the Berlin Wall. Now celebrated as a place for activists and artists alike to create art with acrylics and spray paint, the East Side Gallery is a vivid display of German imagination and creativity. And of course, it’s impossible to understate the historical relevance and importance of free people expressing themselves on what once separated the East from the West.

The works of street artists Mateusz Gapski and Przemyslaw Blejzyk, also known as Bezt and Sainer, cover so much of Poland that it’s hard to direct sightseers to any one part of the country. Known for their enormous works, Bezt and Sainer have decorated entire sides of buildings and other huge public spaces. Their work is so well-loved by Polish natives that the duo has actually been commissioned by the cities where they create their prolific masterpieces. Bezt and Sainer have partnered with another young Polish artist, Natalia Rak, who also creates enormous wall and street art in both Poland and the U.S. The works of these artists range from ultra-modern to folksy and every style between, utilizing well-known Polish motifs and traditional symbols. To spot earlier works from these and other artists, travel to Lodz, where you can see where it all began.