The History of Guinness Stout

Is anything more closely identified with Ireland than a pint of Guinness Stout? Like the British Empire itself, Guinness has colonized taste buds around the world. By the end of the twentieth century, the beer was sold in over 150 countries and brewed in 49. The Guinness Brewery and Storehouse are the most visited attraction in Dublin. With a rich roasted aroma and a hue of midnight ruby, Guinness, an Irish dry stout, has been an emblem of Ireland for over two centuries, and a pint is a must-taste for visitors to Ireland.

Guinness Stout has been crafted at the St. James’s Gate Brewery since 1759 when Arthur Guinness launched his enterprise by signing a 9,000-year lease for the four-acre property. Records show he was preceded by another brewery that started operating there in 1670.

Initially, Mr. Guinness brewed ale. However, a new style of beer called porter was seizing the market, and Guinness embraced the trend. By 1779, the Guinness Brewery was listed as one of two official suppliers of beer and ale to the seat of government at Dublin Castle. Five years later it was the exclusive porter supplier. By 1799, Guinness had eliminated ales entirely in favor of darker brews.

Guinness became Ireland’s largest brewery in 1838, and the world’s largest by 1886, making 1.2 million barrels annually. It is still the largest brewer of stout in the world. After remaining a family business for five generations, changes in ownership punctuated the last half-century, and today it’s owned by Diageo, a British multinational beverage company. 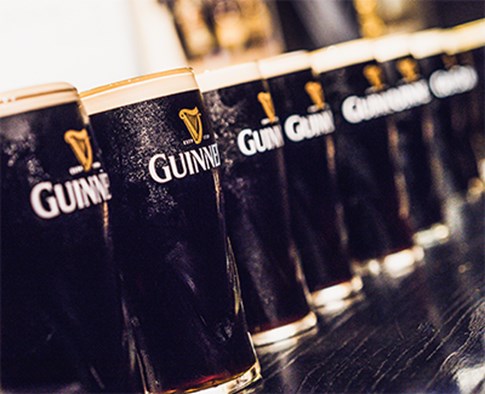 The Many Flavors of Guinness

Many iterations of Guinness have been brewed over its 260 years of production. Their flagship offerings as listed on today’s website include:

Guinness Foreign Extra Stout (bottles): Introduced as West India Porter around 1800, winning loyalty in Africa, Asia, and the Caribbean. Today it accounts for 45% of Guinness’s global sales. This older style of stout has nearly twice the alcohol of draft Guinness, with a tart, refreshing flavor emphasizing the fruity notes of the roasted malt.

Today’s Guinness draught (draft, in American) is a relatively recent evolution. In 1959, Guinness developed a unique nitrogen dispensing system which results in finer, smaller bubbles than a conventional draft system, ensuring a creamier, smoother drink with a distinctive blond head. Craft brewers in the US and beyond have adopted nitro taps for many beers, to achieve a subtler texture and evenly distributed flavors, in contrast to a prickly, aroma-forward carbon-dioxide-drawn beer.

In the 1980s, Guinness launched a draft version in a can, containing a specially engineered widget that imparts finely textured nitrogen-based bubbles upon opening.

What’s the difference between porter and stout? The question inspires spirited debate.

Stout is a direct descendant of porter. In the 1700s, “stout” referred to any variation which was bolder, bigger, and higher alcohol, much as “lite” means the opposite today.

From an 1810 book on commerce: "Porter may be divided into two classes, namely brown-stout and porter properly so-called … Brown-stout is only a fuller-bodied kind of porter than that which serves for ordinary drinking. A great deal of this is exported to America and the West Indies."

The Beer Judge Certification Program describes stout as “a very dark, roasty, bitter, creamy ale,” and porter as “a substantial, malty dark ale with a complex and flavorful roasty character.” While some suggest stouts are defined by roasted barley or patent malt (roasted malted barley), history indicates that stout precedes both those ingredients. 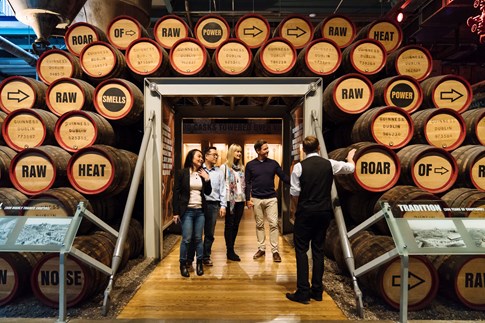 The Guinness Storehouse is a converted brewing facility housing a museum of all things Guinness. An exhibit of company history, brewing techniques, ingredients, and Guinness’s celebrated advertising campaigns culminates at the glass-wrapped Gravity Bar on the seventh floor. The bar invites visitors to savor a pint of Guinness while taking in a nearly 360-degree panorama of Dublin and the working 64-acre brewery below. Other Storehouse attractions include the Perfect Pint bar, where visitors may pour their own pint with expert coaching — a carefully prescribed process that takes nearly two minutes. Also on site are several restaurants and a copy of the 9000-year lease, now void: Guinness bought the property many years ago.

Who can resist the charm of the Emerald Isle? The multi-hued green landscapes, the dramatic seaside cliffs, the hospitable locals, the lively music, and the rich history. Experience it all on a tour of Ireland.

Top Five Foods You Have to Try Before Leaving Ireland

"Bless us with good food, the gift of gab, and hearty laughter. May the love and joy we share be with us ever after." - Irish Kitchen Prayer

The History of Irish Dancing

There are a number of traditional Irish dances performed in communities, pubs, and parties all over Ireland.