10 Things Not to Miss
at the Louvre in Paris, France

Located along the Seine in the heart of Paris, the Louvre Museum is a must-see for travelers visiting France. But with 782,000 square feet of space boasting over 500 paintings and nearly 35,000 objects dating back to prehistoric eras, one could easily become overwhelmed by the museum’s endless offerings.

The top 10 paintings and sculptures you need to see in the Louvre in Paris, France

You can’t go to the Louvre and not see Leonardo DaVinci’s most famous work of art, but be prepared for the crowds surrounding this mysterious masterpiece! The Mona Lisa is perhaps the most popular painting in the world. Her shy smile and guarded identity make her elusive and sought out by many. Be aware, however, that you will be far from the only person wanting to get a glimpse of this famous lady. Plan on plenty of time at this exhibit, perhaps making her your first stop so that you don’t run out of time while waiting to see her later. 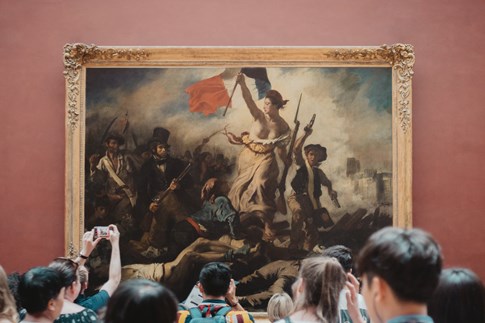 This 1830 painting is one of the newer pieces to be considered a must-see on the Louvre’s list. Painted by Eugene Delacroix, the work depicts the French Revolution and toppling of Charles X during the “Three Glorious Days” (July 27-29, 1830) of the Parisian uprising. The focus of the work, the nude lady Liberty, features the French flag in one hand and a gun in the other. The work uses untamed brushstrokes and bold colors to showcase the exit from the monarchy.

Chiseled from marble, art historians say this famed sculpture is actually a bit of a mystery. They believe she could be as ancient as 100 BC and think that her likeness is meant to resemble an Aphrodite, a God worshiped by those living on the island of Melos (Milos today) at the time. Historians think she may be a replica of an even earlier sculpture, despite showcasing many typical details of the era. It is her small, exposed breasts and the thin veneer of her draped clothing that causes them to suspect that she may be a replica. She is also mysterious for her arms; famously missing. Scholars suspect that she may have once held a mirror, a shield, or an apple.

Michelangelo’s pair of masterworks, The Dying Slave and The Rebellious Slave are also found at the Louvre. Both works showcase chained, nude men. The sculptures pair the physical strength of a slave against their emotional vulnerability in a way that is moving and raw. The statues were created in 1513 by request for the tomb of Pope Julius II. Art historians theorize that the widely differing emotions on the slaves, one in deep sleep, the other in violent revolt, are meant to symbolize the internal human struggle between the soul and the physical body. 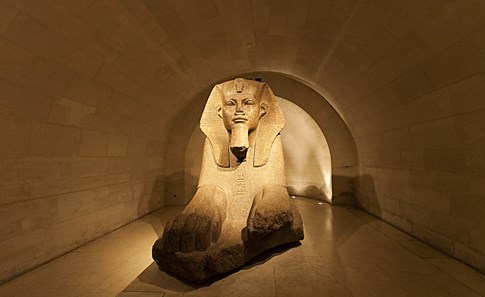 Great Sphinx of Tanis
Sculpture from ruins of the Temple of Amun-Ra in Tanis, Egypt, circa 2600 BCE

Easily identifiable and culturally significant, this Egyptian treasure is meant to pay homage to the celebrated relationship between the sun god, represented by a lion’s body, and a king, represented by the human head, to the people of ancient Egypt. Once believed to bear the inscribed names of several Pharaoh’s this Sphinx was excavated in 1825 as part of the ruins of the Temple of Amun and is believed to be among the largest Sphinx figures outside of Egypt today. 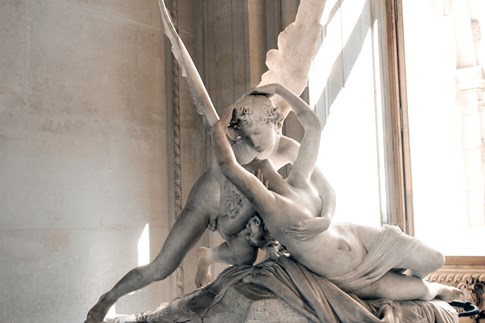 Iconic and carved from white marble, this piece from 1793 brings to life the love story of Cupid and his Psyche. As the story has it, Cupid sees Psyche in a deep sleep, brought on by inhaling a forbidden potion. As Cupid approaches Psyche to kiss her, she awakens with a laugh and embraces him in a moment of tender romance. Renowned for delicate intricacies like cupids arrows in his quiver, the arch of Psyche’s back, and the dimple of her belly button, this sculpture is a favorite to many. 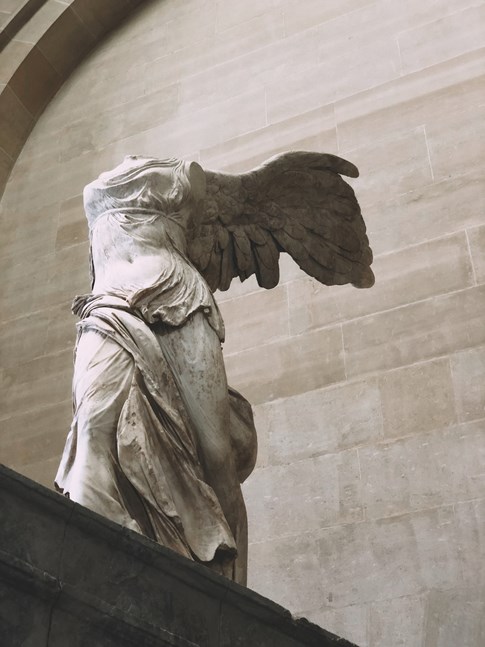 This winged, headless sculpture is another relic from the Hellenistic period, believed to have been chiseled around 190 BC. Also known as the “Winged Goddess of Victory,” this work is believed to be a religious offering for the commission of a naval victory by the people of Rhodes. Also known as the Nike of Samothrace, this sculpture’s likeness is often seen on the bows of ships and appears to be entirely drenched by seawater. The fabric that clings to her body reveals the nude female form beneath while a breeze blows her skirt through her crossed legs.

The Consecration of the Emperor Napoleon I & Coronation of The Empress Josephine in the Cathedral of Notre Dame de Paris on 2 December 1804
Painting by Jacques-Louis David, 1806-1807 BCE

This one certainly wins the award for the longest title! Created between 1806-1807, the work was commissioned by Napoleon, who asked neoclassical painter Jacques-Louis David to create this intricate painting to capture the grandeur of his coronation. The Coronation represented a departure from historical norms when Napoleon crowned himself while facing the congregation as opposed to allowing the then Pope to crown him. This move, meant to showcase Napoleon’s departure from the church’s authority, represents a massive scale, measuring 30 feet wide by 18 feet tall. 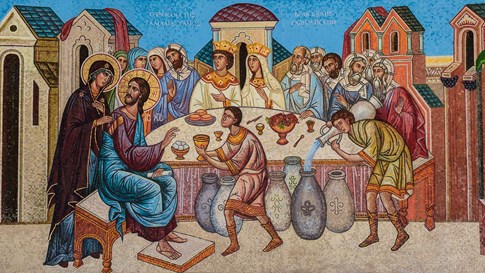 This painting is one of many in the Louvre’s collection that depicts moments from Christian theology. In this scene, artist Paolo Veronese shows the famed wedding at Cana, wherein Christ is said to have changed water to wine for thousands of wedding guests. The work is absolutely mammoth in scale, covering an entire wall and featuring more than 100 figures. The true beauty of the piece lies in the artist’s attention to detail, however. Get close enough and you will find often overlooked details including a parakeet, friendly dogs and even a cat meandering the throng of guests.

While not often categorized as significant traditional or historical art, the French crown jewels are also housed at the Louvre, and represent a departure from the ordinary for many museum patrons. After all, how often do you get to come face to face with a 141-carat diamond? Apart from that stunner, named the Regent Diamond, the crown jewels collection also features the Couronne de Louis XV, Diademe de la Duchesse d’Angouleme, and the Couronne de I’lmperatrice Eugenie. The overwhelming collection includes diamonds, pearls, rubies, topaz, emeralds, and sapphires.

Tours that go to Paris

Enjoy special access (no waiting around in line!) to the museum, where a local expert will share the secrets of the museum’s most epic masterpieces

All France Vacations
save up to $305

8
Days
From
$3,199
5 reviews
Operated By Uniworld River Cruises
VIEW TRIP REQUEST INFO
save up to $342

Jewels of France including Normandy

A Portrait of Majestic France

The Must See GEM in Egypt

A walk through the much-anticipated museum

Discover the best across the US

An unusual take on appreciating art