Trevi Fountain: Why and How
You Toss Your Coin

Trevi Fountain: Why and How
You Toss Your Coin

The Trevi Fountain (“Fontana di Trevi” in Italian) has a history that predates the 1600s, and it’s the most well-known fountain in the world. “Trevi” is a mashup of the Italian words “tre,” meaning “three” and “vie,” meaning “roads,” because the fountain was constructed at the intersection of Rome’s then three most important thoroughfares.

The Design, Redesign, and Folklore of the Trevi Fountain

Today, we know that the original design of the Trevi was more utilitarian than artful, as it was used as Rome’s source for naturally pure and potable water by way of an aqueduct. It wasn’t until many years later that the Trevi Fountain got its Baroque makeover, thanks to a commission from Pope Urban VIII, who had the fountain redesigned and renovated by one of Italy’s most famous sculptors, Bernini (also known for such pieces as The Ecstasy of St. Teresa and The Chair of St. Peter, among many others).

Why Do People Toss Coins in the Trevi Fountain?

According to the legend of Rome’s most famous fountain, there are three key reasons for tossing coins into the Trevi. The first and most well-known reason is based on local lore that states doing so will bring you back to Rome again, someday. But the next two reasons are lesser-known: to find love or romance while in Rome, and to happily marry there. Of course, each wish requires its own coin. So, if you’re a believer of the lore, to find romance, you’ll need two coins, and to marry an Italian in Rome after courting, you’ll need a third coin. Regardless of the gender of the person tossing the coins, these three assurances are to be virtually guaranteed—but only if one knows exactly how to toss a coin into the Trevi to make it so. 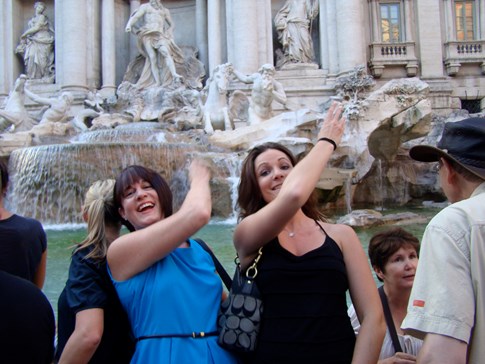 How to Toss a Coin Into the Trevi Fountain

The tradition, folklore, and history of how to toss a coin into the Trevi have not changed (that we know of) in all the hundreds of years that people have been doing it. A proper Trevi coin toss is done using your right hand to throw the coin over your left shoulder. Additionally, if you plan to throw a second and third coin into the fountain, each is to be tossed separately, not all at once. That means right hand over left shoulder three times with three individual coins to be married in Rome—after falling in love with a native, of course.

Tossing a Coin Into Trevi Fountain Gives Back

While there are surely lovers of Italy and lovers in general who will swear their wishes came true because of the coins they tossed into the Trevi Fountain, there’s no denying how much revenue from coin tosses have helped the city of Rome. An estimated 3,000 euros fly into the Trevi each day—as of this writing, that’s about $3,600 in U.S. dollars.

The 85-foot-tall, 65-foot-wide Trevi was Bernini’s largest undertaking ever, and as such a monumental attraction to tourists and natives alike, the world-renowned Italian fountain takes in approximately 1,250,000 euros annually (about $1.5 million U.S. dollars). While these large sums have attracted the eye of thieves throughout the ages, attempts at stealing from the Trevi have almost always been thwarted.

As travelers pray for a promise to return to Rome someday, the city of Rome uses the money gathered at the Trevi to pay for the food and upkeep of a market for the area’s poorest inhabitants.

History of the Bramante Staircase