I have had the pleasure to have visited Greece on two occasions for almost 2 weeks each time.  There is so much to like about visiting Greece, the history, the architecture, the landscape, the beaches, the olive oil, and of course the cuisine!!  The food is so fresh and tasty and for the most part very healthy as it is based on the Mediterranean diet, rich in fruits and vegetables, fish and meat, nuts, and legumes.

Often times when one visits a Greek restaurant while visiting Greece they do not always bring you a menu, especially if you are in a smaller village such as when I visited the island of Skiathos.  The waitperson will arrive at your table and ask you to please follow her or him to the kitchen.  You will then see what the kitchen staff is preparing and make your selection.  A couple of times, I pointed at other diners’ plates and asked what it was, if it sounded good, that is what I would order!

This dish has 4 components to prepare: the meat sauce, boiling the potatoes, roasting the eggplant and making the bechamel. I prepare each part and then assemble it! The preparation can all be done ahead of time and assembled later, or it will also freeze well once assembled. Often, since I am taking time to prepare all of the components, I just double it and put one in the freezer for a later date! The great thing about making the components ahead for the next day is the flavor of the meat sauce improves, or if you have leftovers it is great the next day. It might look daunting, but this is all very basic cooking, do not be intimidated! 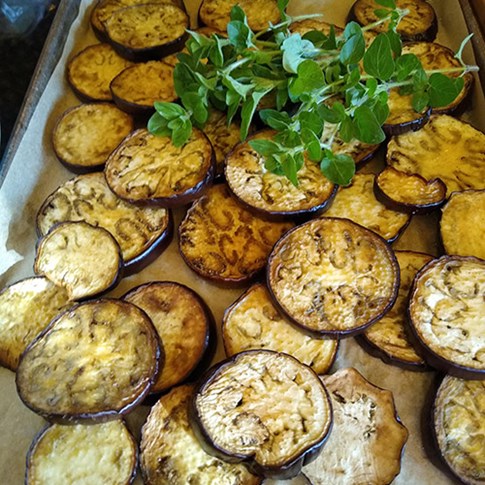 1 32 oz. can of crushed or diced tomatoes

olive oil, or oil of your choise

4-6 eggplants, depending on the size (they do shrink when roasted)

2 russet potatoes (or 4-6 red or white boiling potatoes, depending on the size)

pinch of salt and pepper

1-1.5 cups parmesan cheese (or any cheese that you have on hand that you like the taste of and that melts!)

1. Eggplant
Preheat the oven to 350. Put parchment paper or foil on baking sheets, if using foil brush with oil ( you will probably need 2 – 3 depending on how much eggplant you use and the size of the baking sheets )

Cut eggplant in circles and place on baking sheets. Brush the eggplant with oil, sprinkle with salt and pepper. Roast in the oven for about 20 – 25 minutes, until the slices are soft to the touch. When done take out of the oven and set aside.

2. Potatoes
Put the potatoes in water, bring to a boil and partially cook them, so they are not too soft, as they will be cooked further in the final baking of this dish. Drain and set aside.

3. Meat sauce
Pour about 1.5 – 2 teaspoons of oil in a dutch oven or a large saute pan, heat on medium heat. Add the onions and cook until translucent, then add the garlic and saute while stirring so the garlic does not scorch. Add the ground meat and saute on medium heat until cooked through, then drain the fat into a container, to be disposed of later ( not into your sink drain, or it might clog it up ). Put the pan back on the stovetop and add the crushed tomatoes, cinnamon, and nutmeg, oregano, salt, and pepper. Let the meat mixture cook for about 30 – 45 minutes so the flavors marry.

4. Bechamel
Heat the milk on low heat so it is warm.

Melt the butter, whisk in the flour and cook over low heat, stirring until the flour is golden and glossy looking. Add the milk and stir with a whisk and keep cooking on low heat until the mixture thickens. Add salt and pepper and a little nutmeg if you have it.

NOTE: If you prefer to add the cheese to the bechamel you may do so at the end of cooking the bechamel, otherwise you can put the cheese on the top of the casserole.

5. Assembly
Grease the bottom and sides of a casserole dish of choice, round, rectangular, square. Layer the potatoes on the bottom. Next, a layer of the meat filling, followed by eggplant, meat, eggplant then top it off with the bechamel. (if you did not put the cheese in the bechamel, then put it on top of the bechamel)

A Southern delicacy- comfort food that is easy to make!

From Hungary to your kitchen- a simple but flavorful dish best served hot over noodles.

A Catalonian sauce, with bold roasted tomato and pepper flavor.

Information and articles on global cuisine

Wine, coffee and more around the globe!

Recipes from around the world

Great dishes from our own Barb Gardner!