An Easy Guide to
Tipping in Europe

When tipping in a foreign country, you certainly want to follow local customs, but if you don’t know what they are, you could easily offend the person you’re trying to thank.

How to Tip Appropriately Across Europe

Like much of Europe, the social exchange and standard of acceptance are different from what we’re used to in the United States.

For example, while it is customary to offer an additional 20% of your total check as a tip for wait staff while dining out in the USA, in Europe, many tips are built-in to the base price of your experience, meaning no additional funds are expected to be left at the close of your meal.

If you want to be socially conscious or are completely unfamiliar with local customs, simply tip as the Europeans do and offer a Euro or two per guest in your party. It's that easy.

Here are a few basics of tipping across Europe to help you say “thank you” appropriately.

It was the standard for tipping in the US as recently as a decade ago; pay your bill in cash and leave the change as a tip. But these days, with more and more Americans doing the majority of their spending on credit or debit cards, a cash tip is becoming something of a white unicorn. Most frequently, we just add a few bucks onto the total bill on the receipt before we sign and trust that the establishment will ensure that the server receives the funds. 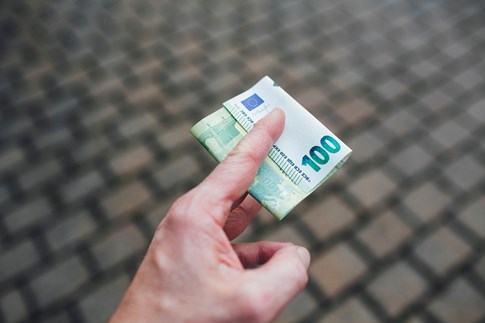 This standard practice has not yet reached much of Europe, however. A credit card tip may not actually make it to your server’s hand in many countries. If you want to ensure they receive the money you intended for them, leave it in cash and on the table before you walk away.

Tipping standards in Europe tend to range a bit lower than the 20% standard in the US. While extra gratuity will always be appreciated, the standard across most European countries tends to hang out closer to 10% for dining out.

What Does "Service Included" Mean?

As previously mentioned, many countries bundle the gratuity with your total bill. Before offering any tip, check to see if you’ve already been charged one. Check for the words “Service Included” to appear on your bill at the end of the meal to figure this out. Note that this will be in the language of the country you’re visiting.

Should You Tip in US Currency or Local?

Is it best to tip in your home currency or Euros? Maybe you should try to tip in local currency wherever possible? Should you consider the exchange rate first? What will be most appreciated? Save yourself the headache. In general, leave a tip in Euros.

Exceptions to this rule: Tip in local currency in Russia, Switzerland, and The United Kingdom.

Do You Tip a Taxi Driver in Europe?

It is customary to offer a basic tip to your taxi driver at the end of your trip. This is typically a small fare and not a big cause for concern. The basic guideline across most Europe is to simply round up the fare to the next dollar. While some in some countries, the custom is to simply deny your change, in others, it is more common to receive the change and then offer it back to the driver.

Exceptions: When it comes to taxis in Estonia, Greece, and Scandinavia, there's no need to tip. It is customary here to tip up to 10% of your total fare in France and Russia.

Get the most for your travel dollar

What you need to know

For tipping on the go