This is a tomato and red pepper-based sauce that originated in Tarragona, which is part of the Catalonia region of Spain.  Almonds and olives grow plentifully in Catalonia as well as the bitxo pepper, the traditional pepper used to make romesco.  Catalonia has a long coastline where fishing has been a popular industry and the fresh fish are plentiful.  Romesco is typically served with seafood, however it is also enjoyed with chicken, vegetables, potatoes or just spread on some bread.  I especially like to make Romesco sauce when tomatoes and pepper are being harvested locally, July – early October.  Enjoy!! 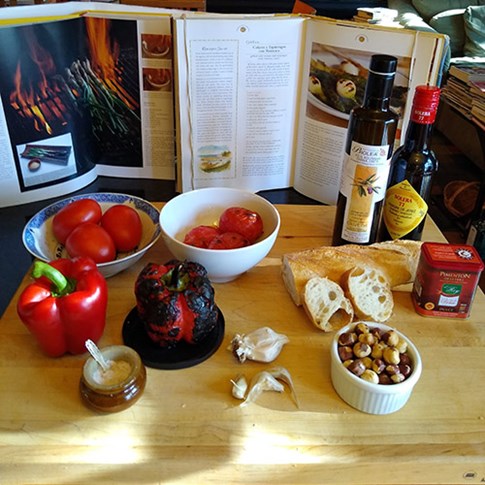 4 bell pepper, roasted (or if you do not want to roast it yourself, purchase already roasted in a jar)

½ cup toasted hazelnuts or toasted blanched almonds (toast in a skillet or in the oven, if using hazelnuts, after they are toasted rub the skins off)

1 tbsp. red wine vinegar or sherry vinegar, if you have it on hand

dried chili flakes, optional if you like it a bit spicy

1. Broil tomatoes
Place the tomatoes on a sheet pan covered with foil, turn the oven on broil and heat up. Place the tomatoes on the sheet pan under the broiler for about 4 minutes, until the skin starts to blister, turn over and do the same on the other side. Once charred take out of the oven and let cool. Once cooled cut off the core, then in half and squeeze out the juice and the seeds. Set aside.

2. Roast the bell peppers
If you have a gas range and want to roast the bell pepper turn on the burner and place the pepper directly on the flame and let it char, turning so it chars all of the skin, then place in a container and close it so that the pepper steams. After it has cooled peel the skin off and take the seeds out.

3. Process the sauce
In a food processor or a blender add the garlic and the nuts and process until they finely chopped. Next add the tomatoes and the roasted bell pepper and process until smooth. Add the paprika and red pepper flakes, if using. Add the vinegar after that add the olive oil in a stream to let it emulsify the sauce adding the smaller amount first. If it looks like it needs more then add more. At this point taste the sauce and add salt and pepper to taste. If it seems like it needs to be thicker, then add some bread and process that into the sauce.

4. Refrigerate
This will keep in the refrigerator for 5 – 6 days. I use this with chicken, fish, roasted vegetables, on a sandwich, as a dressing for potato salad, as part of a crostini appetizer, use your imagination!!

A Southern delicacy- comfort food that is easy to make!

A Mediterranean classic that is unintimidating and tasty!

From Hungary to your kitchen- a simple but flavorful dish best served hot over noodles.

Information and articles on global cuisine

Wine, coffee and more around the globe!

Recipes from around the world

Great dishes from our own Barb Gardner!