Top Foods to Try in Spain

One of the most exciting parts of a vacation is sampling the local cuisine. And when it comes to Spain, there’s a lot to explore. Here are the top eight foods to try on your trip to Spain.

The quintessential small plate, Spanish Tapas are similar to what we’d call an appetizer in the States, only smaller. Think tiny sandwiches, almonds, small bits of squid, olives, and cheeses. The best part? While not always the case, many tapas are served free of charge when you order a beer or a glass of wine. 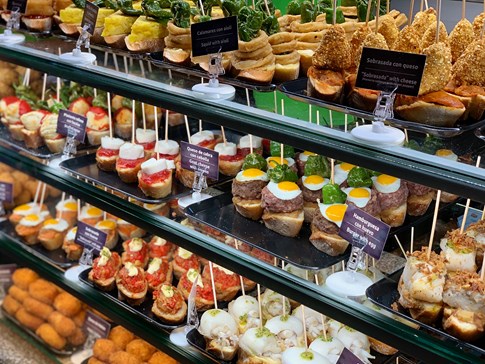 This culinary tradition plays a big part in Spanish culture, as tapas can be eaten for a snack, appetizer, or meal. Don’t sell yourself short though, make sure you try plenty of new items. They’re small, so if you find that you don’t like one, it’s on to the next! Tapas are so varied and convenient; they’re easily one of our favorite foods to try in Spain.

Like many other parts of Europe, Pork is a staple meat in the Spanish diet. While many pork offerings are superb, this Spanish sausage offering reigns supreme. This sausage can be served smoked or plain, often spicy and flavored with garlic, paprika, and salts. Not a fan of spice? No worries. Most restaurateurs offer a sweet version of this sausage called Dulce Chorizo.

This traditional breakfast food is like an American omelet but with a twist. It contains all of the usual suspects, onions, ham, potatoes, and peppers, but what makes this egg dish different is its size. Unlike her thinner American cousin, the Tortilla Espanola is served an inch and a half thick! In fact, it’s often heftier than the plate it is served on. Despite its grand size, this dish is one of the most popular in Spain and can be served as a tapa or light dinner. 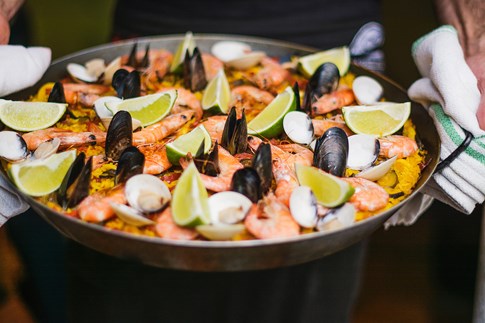 Savory and filling, paella comes from the region of Valencia and is one of the most typical dishes in Spanish cuisine. The delicious rice dish often stirs in prawns, fish, or scallops, chicken, pork, rabbit, or beef may also be used, but really, the seafood experience makes this plate a classic. Sound enticing?

Step away from everything you thought you knew about soup to try this one- served chilled. In the summer, especially in the south of Spain, people eat this rich tomato and bean soup every day. You’d be hard-pressed to find a tapa bar that doesn’t have a jug of gazpacho sitting on the counter. Other ingredients in this rich blend? Try to pick out the flavors of garlic, olive oil, peppers, and even cucumbers!

A dessert dish that looks similar to the French Crème Brulee is very similar indeed. However, the differences between the custard dishes, topped with burnt sugar, are notable. The Spanish version, most popular in Barcelona, is served chilled as opposed to warm and replaces French elements of vanilla with cinnamon and lemon rind.

Because this this can’t be all about food, we present you with the Sangria. A traditional alcoholic drink, Sangria is typically served on ice and is especially popular in the south of Spain and in the summer months. The base of the drink is red wine, but the beauty and flavor profile comes from the addition of spices like cinnamon and ginger. These most often include triple-sec, brandy, soda, sugar, oranges, and lemons. It’s traditionally served in a large pitcher or punch bowl style so that it is easily shared by an entire table.

How to Make the Perfect Sangria 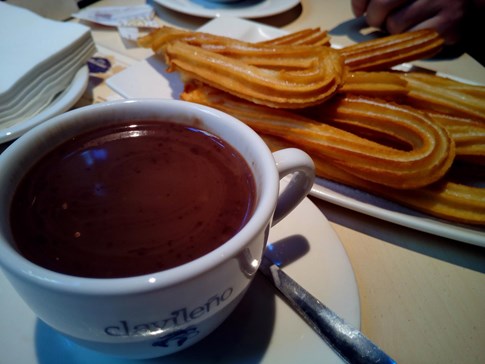 Polish off your dining experience with this popular dessert. A churro is little more than a long, thin dough stick that has been deep friend and sprinkled with sugar (and occasionally cinnamon). What makes it special tends to be the dipping sauces that come with the churros. A classic favorite is a small dish of “hot chocolate,” which in Spain is more similar to fudge than a beverage. This social treat lends itself well to sharing, if you’re feeling generous!

A Beginner's Guide to Spanish Tapas

No Spanish adventure is complete without sampling the local paella.