The Story of the Shrine
of Fátima in Portugal

The Story of the Shrine
of Fátima in Portugal

Over a century ago, the village of Fátima in central Portugal was a rustic enclave devoted to sheep herding. Today, it’s a major Catholic pilgrimage site. The Santuário de Fátima, built where visions and miracles purportedly took place in 1917, attracted 9.4 million visitors in its centenary year. Even Pope Francis made a pilgrimage in May 2017, 100 years after the Virgin Mary first appeared to three shepherd children. 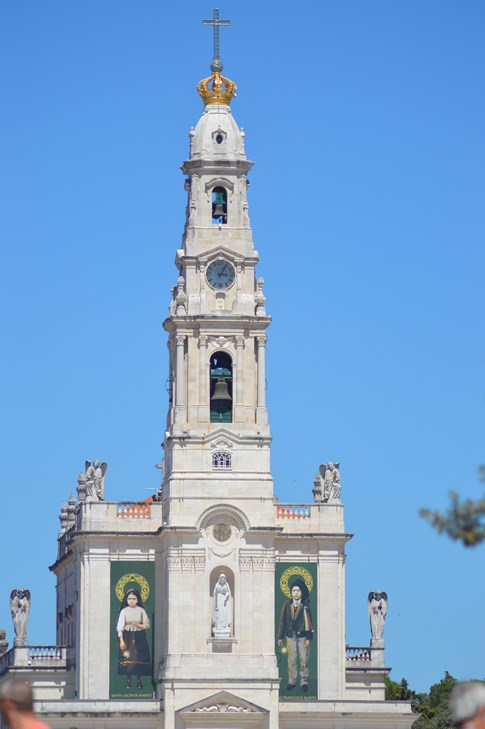 40 miles north of Lisbon, The Sanctuary of Fátima is now a massive complex, including the Basilica of the Holy Trinity, completed in 2007 – the fourth largest Catholic Church in the world. The shepard children's depictions can be seen on the Basilica of Our Lady of the Rosary.

The location of the most significant Marian apparition of the 20th century according to many, the Shrine of Fátima is a holy site for Catholics and a cultural must-do for visitors on a tour to Portugal.

The Apparition of the Virgin Mary, Our Lady of the Rosary

It was May 13, 1917. The United States had just joined the allies in World War One, and three children – 10-year-old Lucia dos Santos and her cousins Jacinta Marto, 7, and Francisco Marto, 8 – were tending their family’s sheep. The Três Pastorinhos (three little shepherds) saw a bright light in a place called Cova da Iria. Then, beside a small oak tree, a woman shining brighter than the sun revealed herself.

Only Lucia could speak with her. She identified herself as the Lady of the Rosary and told Lucia she would appear there on the 13th for the next six months. Each month, the children returned to the spot and saw her, although she was invisible to others. Lucia requested a miracle, to persuade people to believe in their visions.

The Miracle of the Sun Persuades the People

The massive crowd assembled near the oak tree. Soaked by cold rains, they awaited their miracle on muddy fields. Our Lady of Fátima appeared to the children, telling Lucia a chapel should be built there in her honor and predicting the end of the war, which resolved about a year later, on November 11, 1918.

When Our Lady ascended, the wet cloudy skies suddenly cleared and the sun danced. For about ten minutes, witnesses watched the sun twirl and blaze, scatter a rainbow of colors, plunge to the earth and zigzag back into place. The crowd found themselves suddenly dry, despite the hours of soaking rains. Contemporaneous newspaper articles reported on the phenomenon.

Tours of Fátima in Portugal

In addition to seeing the Sanctuary of Fátima, these tours will introduce you to Portugal's proud history, warm-hearted locals and soul-warming cuisine.

Visit Portugal
save up to $338

Highlights of Spain and Portugal

The Sanctuary of Our Lady of Fátima Today

The neo-baroque Basilica of Our Lady of the Rosary, with a 200-plus-foot tower topped by a large bronze crown and a crystal cross, houses the tombs of the three children and a 1952 organ with over 120,000 pipes. It’s flanked by hospitals and retreat houses.

The sleek, modernist Basilica of the Holy Trinity lies opposite, with the little Chapel of the Apparitions from the 1920s between. There are masses held throughout the day, daily processions, Stations of the Cross, and many more pilgrim’s attractions, as well as abundant shops, restaurants, and lodgings nearby.

Also open to the public: The childhood homes of the three children, where visitors can view their bedrooms much as they appeared a century ago.

A Landmark of Marian Worship

Initially, the church doubted the veracity of these visions. Eventually, the Catholic Church came around, acknowledging the events’ "supernatural character" in 1930.

A national pilgrimage to Fátima occurred in 1927, and the construction of the Basilica of Our Lady of the Rosary began in 1928, to be consecrated in 1953. The compound has been expanding ever since.

Pope Pius XII approved the "Fátima apparitions" in 1940, and claimed to witness the "Miracle of the Sun" in October 1950 in the Vatican gardens. The story of Pope John Paul II’s attempted assassination was apparently predicted by Our Lady in 1917.

In 2017, Pope Francis canonized the two younger children, who died in 1919 and 1920. Lucia died in 2005 after a long and cloistered life as a nun. Her canonization is in process.

The History of Port Wine

Discover why it's so unique

A favorite national dish of Portugal