Check out our GETAWAY Deals

Top Five Irish Dishes You Have to Try

Top Five Irish Dishes
You Have to Try

"Bless us with good food, the gift of gab, and hearty laughter. May the love and joy we share be with us ever after." -Irish Kitchen Prayer

You don't have to be Irish to appreciate a comforting dish of Irish Stew and a well-poured Stout. Wherever you visit, the local fare may be a bit interesting and different from what you might be used to. While traveling through the Emerald Isle, you'll certainly have time to sample a traditional dish or two. Try one of our top five choices for a really authentic Irish experience!

Irish stew, ballymaloe or stobhach gaelach as it is called in Gaelic, is a throwback to Irish peasant roots and harsh times. In the 19th century Ireland, most cooking was done in the fireplace. 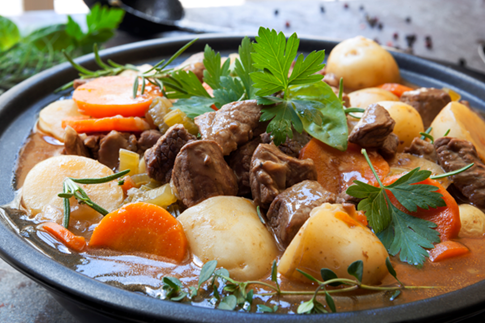 With only a hanging pot, an open fire, and a few fairly easily attainable ingredients, even poor families were able to survive on Irish stew. A cauldron was used to let the ingredients cook while being heated by the fire in the hearth. The stew is traditionally made of tougher meat (such as mutton), potatoes, and onions. In more modern times, a variety of meats, such as beef or lamb are used, as well as the occasional addition of Guinness, herbs, or root vegetables. While the more modern recipes may add some glamour, the stew itself most always calls for the original first three ingredients.

While both are traditional Irish mashed potato dishes, the two differ in the ingredient that gives this dish its green 'tint'. 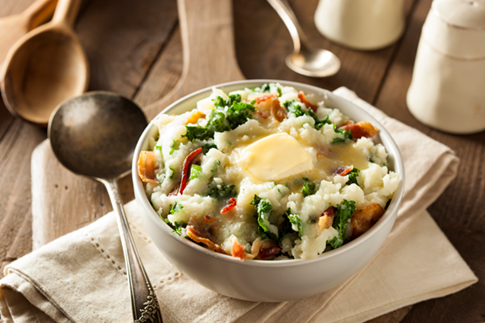 Colcannon: If there is any truly traditional Irish dish, this is it. Traditionally made from mashed potatoes, cabbage, and butter, it may not seem like much but it is the perfect comfort food for cold winter nights and makes a great side dish. It can often be found aside boiled ham or Irish bacon.

Champ: Native to Northern Ireland, Champ looks similar to Colcannon. It differs though in that it's made with scallions (or spring onions) and creamy mashed potatoes. The scallions are soaked in hot milk before combining with the potatoes. If done correctly, the dish can be absolutely superb. Champ is great on its own, served steaming hot with extra butter. It's also the perfect side dish for good quality sausages.

Boxty is a traditional Irish potato pancake dish. The dish is mostly associated with the North West and Midlands of Ireland, in particular the counties of Sligo, Mayo, Leitrim, Cavan, and Tipperary. 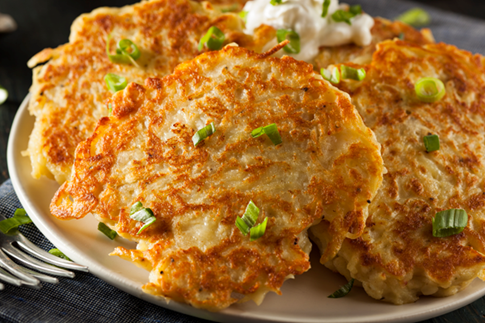 There are many different local recipes but all contain finely grated, raw potatoes, and all are served fried. The most noticeable difference between the Irish boxty and other fried potato dishes is its smooth, fine-grained consistency.

This dish is a favorite among children. Some tales are told about how children would puncture a tin can with an awl in order to 'grate' potatoes for boxty feasts!

There's even a traditional song about this favorite dish:

(some renditions read: If you don't make boxty/You'll never get your man)

Dublin coddle, a warming meal of sausages and potatoes dates back to the 1700s and is traditionally thought of as a city dish eaten in the winter months. 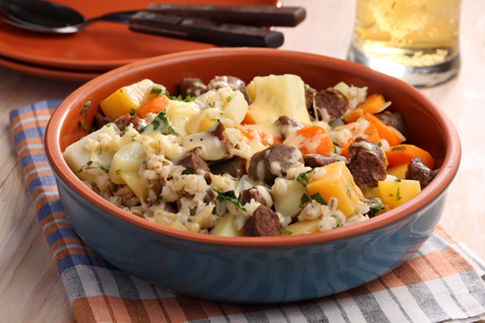 Its popularity has been attributed to the fact that an Irish wife could go to bed and leave it simmering on the stove for hours so that it might be ready for when her husband arrived home from the pub.
A favorite of Jonathan Swift, the author of Gulliver’s Travels, coddle has many references in Irish literature, including the works of James Joyce.
Dublin coddle is best served with a pint of Guinness on the side, and lots of Irish soda bread to mop up the gravy.

A traditional food that has firm roots in Ireland's history is Irish black pudding. Sometimes called blood pudding, there’s no escaping the fact that, yes, black pudding is made with blood. In contrast to sweet puddings, black pudding in Ireland is a soft-textured sausage made with the blood of pigs or cattle and is traditionally mixed with fillers of pork products, onions, oatmeal, and additional flavorings. 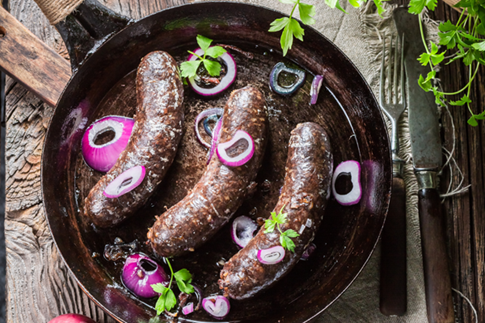 While it is a most-loved taste to many, those suspicious of its blood content, studs of fat, and irony flavor won’t touch it with a ten-foot pole. If you’re feeling adventurous and in the mood for a full traditional Irish breakfast, your black pudding should be paired a few slices of white pudding. White pudding is basically the same as the black, without the blood mixed in. Both are served for breakfast, sliced and then grilled or fried, alongside rashers (somewhat like American bacon), eggs, bangers (sausages), boxty or boiled potatoes, Irish beans (think of less-sweet baked beans), and soda or brown bread. You can spread your white pudding on bread and eat it as such, as it’s good in this form. Black pudding, however, should be crispy on the outside and tender on the inside.

Some Americans might be wary of enjoying this breakfast pudding, however, you never know until you try it!

Who can resist the charm of the Emerald Isle? The multi-hued green landscapes, the dramatic seaside cliffs, the hospitable locals, the lively music, and the rich history. Experience it all on a tour of Ireland.

The History of Irish Dancing

There are a number of traditional Irish dances performed in communities, pubs, and parties all over Ireland.

The History of Guinness Stout

With a rich roasted aroma and a hue of midnight ruby, Guinness, an Irish dry stout, has been an emblem of Ireland for over two centuries