The Best Places to Visit in Peru
& the Sites Machu Picchu

You'll love the classic wooden doors on the modern buildings and houses – the mix of the old with the new, and the parks with groves of mature olive trees. Make time to explore the perimeter of an archaeological site, Huaca Huallamarca. You can also visit Casa Diez Canseco, the home of the Peruvian statesman Francisco Diez Canseco Tavara. The home is full of Cuzco School paintings and exquisite European antiques. 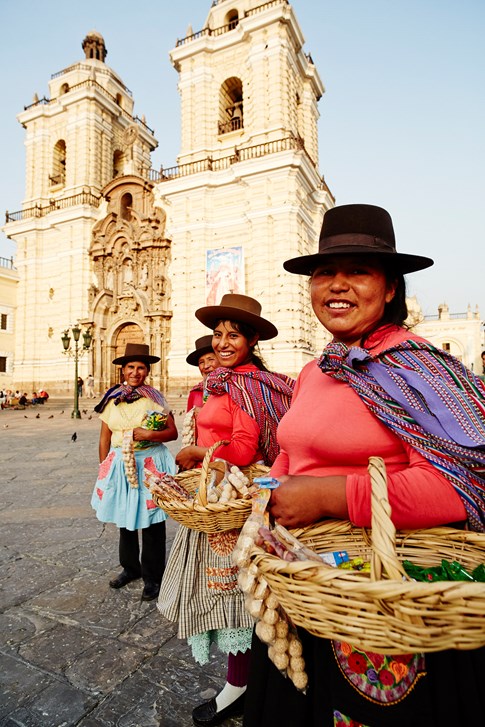 Here, one sees the combining of church and state: government buildings with churches and cathedrals surrounding the square. The plaza is often bustling in the early mornings and late afternoon, often with public events at the President’s palace. Tour the Church of San Francisco and walk through its dusty catacombs. By the way, Pizarro is buried here in La Catedral.

Immerse yourself in the tropical allure of Rio de Janeiro and visit a Samba school to find out how the school prepares for the pageantry of Carnival week.

Treasures of the Incas

Land of the Incas

In the Footsteps of the Incas

There's plenty to explore in Cuzco, the former capital of the Inca Empire, which Pizarro conquered and claimed for Spain. You can pay a visit to the fascinating geologic site of Sacsayhuaman, check out the San Blas district known for its art galleries, stroll the main town square, the Plaza de Armas, and pick up beautiful local gifts in local stores. Also, not many people know that Cuzco lights up beautifully at night with many Colonial structures built on top of the old Inca stonework.

Travel through the Sacred Valley following the Urubamba River with views of soaring, snowcapped peaks alternating with lower rounded foothills that were dotted with Inca terraces and working agricultural fields. It’s amazing to see what an empire the Incas engineered high up on hilltops in this remote region.

Make time to stop at the town of Pisac to explore its large market. You can grab a bite and walk the colorful stalls and streets, bartering with the villagers for hats and textiles.

Pay your respects at the ancient site of Ollantaytambo and have a guided tour of the Inca ruins. The stone carvings and rock walls were remarkable. The stones are massive – all different in size – yet they have been carved and smoothed to conform and fit perfectly like a jig-saw puzzle. These walls have survived centuries and even major earthquakes!

Visiting the remains of Machu Picchu in Peru is a pilgrimage that many feel drawn to experience. Originally built as an estate for an Incan Emperor, the site is believed to have been constructed in the mid-14th century. It is located in the Cusco Region of the Urubamba Province. It was abandoned roughly a century later during the time of the Spanish Conquest. The result was a city left to deteriorate slowly.

Interestingly, while locals knew the whereabouts and significance of this site, the outside world (including the Spanish during their conquest) was largely left in the dark about the existence of Machu Picchu until 1911, when American historian, Hiram Bingham, brought it to the limelight. Bingham’s revelation catalyzed renovations on the site to begin.

The site was built with stone walls that were dried and polished. A handful of the remaining restored structures are considered highly significant and worthy of individual attention. Here’s a look at a few points of interest to those visiting the Incan Citadel.

How to Get to Machu Picchu

To visit Machu Pichhu, you'll need to get to Cuzco in the Peruvian Andes, the Inca heartland. Cuzco sits at 11,444 feet. Machu Picchu is lower in elevation at 7,970 feet. Travel down through the Sacred Valley towards Machu Picchu to acclimate. Staying at a lodge below Machu Picchu helps adjust to the change in altitude. Also, coca tea is served almost everywhere and is believed to alleviate the symptoms of altitude sickness.

How to Get to Machu Picchu

To visit Machu Pichhu, you'll need to get to Cuzco in the Peruvian Andes, the Inca heartland. Cuzco sits at 11,444 feet. Machu Picchu is lower in elevation at 7,970 feet. Travel down through the Sacred Valley towards Machu Picchu to acclimate. Staying at a lodge below Machu Picchu helps adjust to the change in altitude. Also, coca tea is served almost everywhere and is believed to alleviate the symptoms of altitude sickness.

The Vistadome Train to Machu Picchu

Perhaps the most interesting way to arrive is via the Vistadome train. The train, which features panoramic windows both beside and above your seat, is famed for sweeping vista views of Peru while en route to the Incan Citadel. On the return trip, Vistadome offers a variety of entertainment options, including a for-a-purchase fashion show featuring the latest in Alpaca wool styles. With food and beverage available and often included in your ticket price, the train offers a first-class addition to your Machu Picchu experience.

The Temple of the Sun

Believed to be a place of high integrity among the Incas, this semi-circular room is built atop a granite rock and is believed to have been accessible only to priests and members of high society. The room brags just two windows, said to align with the winter and summer solstice. The Temple is located in the urban sector of Machu Picchu and can only be entered through an access gate. The Inca believed that close proximity to the sun was paramount, and thus placed this temple at the highest altitude in the city. Also located within the temple is the Torreon tower. Believed to be the most important structure in all of the city, this tower indicated the precise location of the highest altitude. Also, paying attention to what happens underfoot, the Inca built a cavern beneath the tower. It is believed that this area was intended to be used for mummified remains. There are nine hollows here that could have served as graves.

The House of the Priest

Located across from the principal temple, the House of the High Priest may be a deceiving name for this structure. No specific accounts can accurately point to whether or not a priest actually lived here during the Incan inhabitation. The house serves as one of the only solid structures in Machu Picchu and, like the other great temples, is one of the few structures to boast four walls.

Also located in the urban sector, the Sacred Plaza is believed to have served as the political center of Machu Picchu and as a gathering place for celebrations and ceremonies. The Plaza is strategically located to be surrounded by several of the city’s main structures, including the main temple, the temple of Three Windows, and the Intihuatana. Several terraces surround the plaza, allowing it to expand to hold more people during these ceremonies or celebrations. A variety of disciplines were studied and celebrated here, including astrology, astronomy, geology, mathematics, and physics. However, the most important use for the plaza was its purpose as the Astronomical Observatory.

The Hut of the Caretaker

Easily identified by its location, this thatched-roofed hut is set apart from the rest of the structures. The hut is believed to have been positioned near a large rock used in the mummification process. You’ll see many tourists taking photos here, and for a good reason. From the Caretaker’s hut, the entire city is visible, also thought to have been a deciding factor in the hut’s placement.

This name, which means “places where the sun in bonded,” is given to a large rock that, in many ways, served as a timekeeping device for the Inca. It was far superior to any sundial, as the pillar was able to predict sun solstices. While other similar rocks were found in ruin in other Incan cities, this one escaped demolition by the Spanish, who believed sun worship to be unholy.

From Carnival to dance competitions

7 Signs You Need a Vacation

Symptoms of a soul that needs to travel

Find out why Costa Rica is a nature-lovers paradise!