The History of the Vatican
Museum's Bramante Staircase

The History of the Vatican
Museum's Bramante Staircase

Vatican City is the smallest sovereign state in the world, at about 0.17 square miles, half of which is gardens. Surrounded by sprawling Roman neighborhoods, this historic complex of plazas, porticos, and buildings is the heart of the Catholic Church.

The Sistine Chapel and its glorious ceiling painted by Michelangelo may be the Vatican’s most famous feature, but the caliber of architecture, art, and sculpture throughout the complex is in a class by itself.

On certain Vatican Museum tours, select TTC tour operators proudly offer exclusive special access to the hidden museums of the Vatican. Guided tours by local experts include the original Renaissance Bramante Staircase and the frescos of early saints in the Niccoline Chapel within the Apostolic Palace, both normally off-limits to visitors.

The original Bramante Staircase was designed for Pope Julius II by architect Donato Bramante (also known as Bramante Lazzari), who played a central role in designing many buildings in the Vatican complex. Born in 1444, Bramante introduced the High Renaissance style to Rome. Among other Vatican accomplishments, he designed the current St. Peter’s Basilica (later executed by Michelangelo) and the Belvedere Courtyard.

Situated in a private area of the Belvedere Palace, this staircase has long been closed to the general public. Its original function was providing access to the residential upper floors. By interlaying two round spiral ramps within a square tower, Bramante ensured one-way traffic. This was necessary because the structure enabled horses, pack animals, and even entire carriages to ascend to the top floor to deliver everything from furnishings to the Pope himself. Considering the length and weight of papal robes in the 16th century, it’s clear that climbing several flights of stairs in such garb would be challenging. 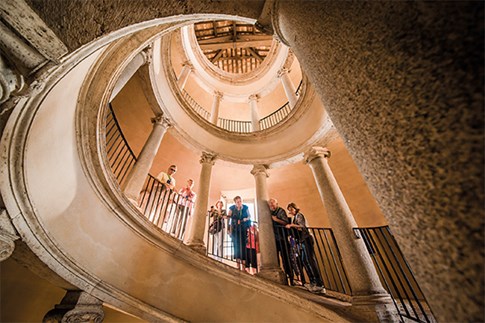 The original Bramante staircase is architecturally understated. A colonnade of 36 granite columns provides structural support. The steep spiral ramp ascends for four revolutions, paved in a herringbone pattern. Remarkably,  the design of the original Bramante Staircase preceded the double helix shape which was identified as the structure of DNA in 1953. Arched windows deliver ample natural light along with spectacular views of Rome and the Vatican. While the original destination was the papal apartments on the top floor, those quarters eventually transitioned into a sculpture gallery.

The New 1932 Bramante Staircase: Open to the Public

The new Bramante Staircase, also a pair of ramps arranged in a double helix, was designed by Giuseppe Momo in 1932 in homage to the original. Twin ramps trace the interior walls of a tower about 50 feet in diameter. Like the original, the center of the tower is open, allowing views from the top to bottom. Natural light cascades through a glass ceiling, illuminating the highly embellished bronze balustrade whose motifs include the papal seal.

The Pio Clementino Museum was founded by Pope Clement XIV in 1771 and completed by Pius VI. These two pontiffs were among the first to offer collections of art and sculpture to the general public to promote cultural advancement. Today, Greek and Roman sculpture make up the bulk of the exhibits, one of the world’s largest collections displayed in 12 elaborate marble-clad rooms.

The Bramante Staircase, an architectural marvel over five centuries old, is just one superlative in a day of superlatives.

Michelangelo’s magnificent gold-leafed, deeply coffered ceiling within the dome crowning the cupola of St. Peter’s Basilica; Michelangelo’s iconic ceiling of the Sistine Chapel; the smallest sovereign state in the world; the greatest pilgrimage site in Catholicism.

Memories of a Vatican visit will surely endure for a lifetime.

6 Things Not to Miss at The Colosseum in Rome

Sights and more at the Colosseum