10 Things Not to Miss
in Vatican City

Vatican City has many works of art and artifacts that beckon tourists from around the globe. Despite its small size, many of the most famous works of art in the world are housed here, making this a full-day adventure for all tourists of Italy. While most know that the Vatican is the central home for the Catholic Religion, many don’t realize that it is its own governmental entity. A city center governed by the Pope, this residential and business center for the Catholic Church is located inside a 110-acre enclave in Rome. With a population of just over 800, it is also the smallest sovereign state in the world in terms of both size and population. Here’s a look at the ten largest things this tiny city has to offer.

Start your Vatican experience in the museums. It is here that you will find Michelangelo’s famed Sistine Chapel. Additionally, you can also expect to find Egyptian mummies, classical sculptures, and Renaissance canvases. A real highlight is the 18-room Pinacoteca, displaying paintings from the medieval age to the 19th century in chronological order. Many of the works are former personal paintings having once belonged to former Popes. 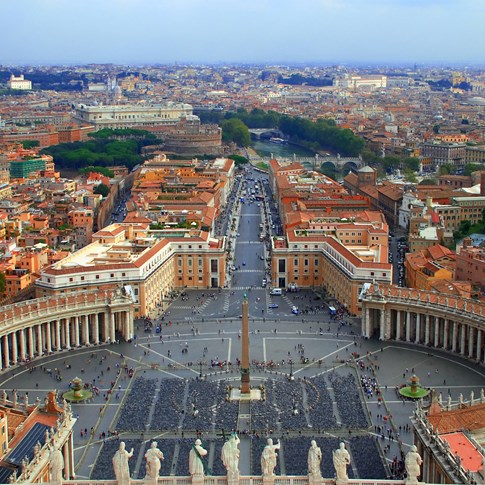 You’ve no doubt seen St. Peter’s Square, crowded with visitors and pigeons, in a variety of TV shows and movies. Here’s your chance to have the experience yourself. The square is the open, keyhole-esque area between the two rows of the towering colonnades. These structures, designed by Gian Lorenzo Bernini, are meant to symbolize the “motherly arms of the church.” The square can become quite busy on Sundays after services, and on Wednesdays when the Pope often meets the faithful either in the square or in the Aula. Be sure to take in the strength and splendor of the many columns and of St. Peter’s Basilica dome, towering at the top of the square, before heading out.

Gain VIP Access to the Vatican Museums and The Bramante Staircase, and see The Sistine Chapel and St. Peter's Basilica when you go on a tour of Italy with GET

Italy Vacations
save up to $222

Prepare to be humbled as you enter the towering fortress that is the heart of Vatican City. Upon entry to the basilica, you are greeted by a towering sculpture of the Madonna cradling her lost son in Michelangelo’s Pieta. The inspiring works of art are just getting started, as you prepare to travel through the 187 meters of interior passageways. Also, plan on doing as the faithful do and rubbing the toe of the sculpture of St. Peter as you pass by. This tradition has left the masterpiece lovingly worn down. You’ll also take in Bernini’s 29m-tall Baldachin and the Cattedra di San Pietro, a yellow window filled with angels.

Expert Travel Tip: Don’t be denied entry to the Basilica! Like most, this religious building has a strict dress code. If you arrive wearing shorts, short skirts, or bare shoulders you may not be allowed in. Carrying a scarf or shawl with you and having a long pair of pants or long skirt in your day bag is always a good idea.

This spiraling staircase is actually two structures combined into one. The original staircase, constructed in 1505, as well as a modern component, completed in 1932, come together to connect the Belvedere Palace with the outside. Originally created for Pope Innocent VIII, the staircase features granite columns and was designed to allow Popes access to private residences while still in their carriage. Both the modern and historical staircase is a double helix design that allows people to ascend and descend without seeing one another.

History of the Bramante Staircase

Commissioned by Pope Julius II, and later by Pope Leo X, these rooms contain a mass of frescos painted by famed artist Rafael. These frescos are prized for their return to classical methods of painting including symmetry and revolving characters around a central focal point of the work. While most of the paintings in these rooms were completed by Rafael himself, not all are his handiwork. Some are the work of students under his direction and in his style, while others were completed by other famous artists including Giulio Romano and Gian Francesco Penni. The latter artists completed Rafael’s vision posthumously.

We love a good library, and this one ranks right up there with the best. The Vatican’s library is one of the richest in the world if judged by the value of its content. The library boasts hundreds of thousands of titles. Among them are 7,000 works printed before 1500 AD, 25,00 medieval handwritten books, and 80,000 handwritten manuscripts, collected since the library’s founding in 1450. You can also find a large collection of more modern titles. The books and other written works, including beautifully illustrated Gospels, Biblical codices, and ancient scrolls all fill shelves that fall beneath the beautifully adorned walls. No shortage of paintings here, either as your eyes are filled with beautiful murals and frescos.

An iconic part of St. Peter’s Basilica, the dome is also available for climbing. The trek starts with entry through an understated and creaky door located to the right of the main entrance to the Basilica. From there, brave a rickety elevator ride and climb an additional 320 stairs to the top of the dome. Once there you’re greeted with inspired vista views of Vatican City and Rome. This is a popular attraction, so you’ll want to plan ahead for it. 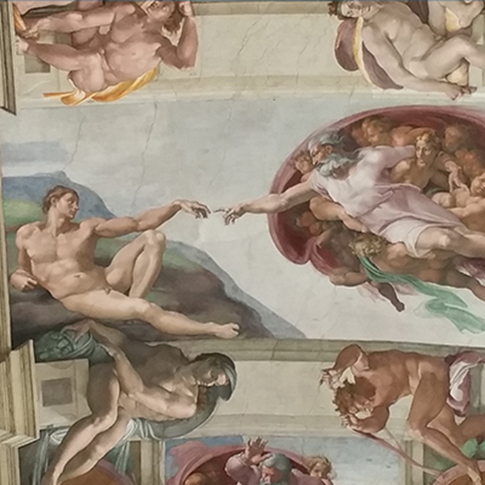 Perhaps the most well-known, and frequently visited, attraction in Vatican City is Michelangelo’s painted ceiling inside of the Sistine Chapel. The chapel houses two separate works of art: The Ceiling Frescos created between 1508-1512, and the Giudizio Universale, or the Last Judgement, created between 1535-1541. The entire work covers more than 800 square meters and depicts images from the Old Testament.

Extend into the depths of St. Peter’s Basilica into the grottos to experience a new level of respect at the tombs of past Popes and leaders of the Catholic faith. You’ll also find the towering original pillars of the original 4th-century structure here. Find the entrance to the Grottos in the Pier of St. Andrew, near the high altar.

No photos are allowed and only 250 guests per day are granted access to this necropolis, but it stands out as a worthwhile experience if you can make it onto the guest list. The supposed burial site of St. Peter, the tour lasts just over an hour and will be required to be booked many months in advance. There are many stairs to descend, so you should be in good physical condition, too.

Why Tuscan wines reds are popular around the world