History and Art
of Flamenco Dancing

"You can't have a true Spanish experience without Flamenco."

The History of Flamenco

According to most scholars, Flamenco dancing dates to the 15th century, though there are claims the art dates back to even the 14th. The golden age of flamenco rose during the Romantic Era — from the late-1700s to the mid-1800s. During this era, singing was the primary concentration of focus within Flamenco; with guitar and dance playing a supporting role. In 1881 Silverio Franconetti opened the first café cantante inviting spectators to imbibe and enjoy a firey musical show. Even though Franconetti was a Flamenco singer, the shows featured the dancers in the spotlight; the singers playing supporting roles.

These bars and shows developed and spread over time, eventually opening the door for ópera Flamenca, once the opera and ballet began incorporating elements of Flamenco. What had begun as an amalgamation of folk forms was now transforming into a serious commercial force; appreciated by Spanish aristocrats.

In fact, in order to protect its Spanish authenticity, artists and intellectuals began to hold Flamenco competitions in the 1920s; popularizing Flamenco on the global stage. In an attempt at propaganda, it was adopted by Spanish dictator Francisco Franco as the National Dance of Spain, further cementing the art form into its esteemed place.

There are three categories of flamenco songs: cante jondo, cante intermedio, and cante chico—profound, intermediate, and light songs, respectively. Cante jondo songs typically flow with heavy emotional themes—death, sadness, religion. The cante chico has a lighter, happier tone—love, celebration, renewal—and simpler rhythms. Cante intermedio songs fall in between the two; though even when dealing with serious issues, they have a less tragic feeling. 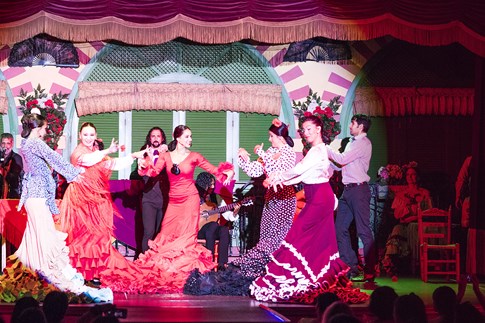 In flamenco performances, the female dancers customarily wear an elaborate red or black ruffled dress which helps accentuate her movements. Some say that the Polka dot pattern typical in Flamenco draws its origins in the small, round mirrors traditionally worn on clothes to ward off evil spirits. Male dancers wear tight black pants and a white, long-sleeve shirt with a jacket or vest.

The Art of Flamenco Dancing

The male focuses on complex footwork and the female dancer emphasizes the movements of the hands and torso, while the guitarist keeps time. It's romantically acknowledged that the Flamenco dress is said to enhance the dancer's shape in a similar way to a "guitar body." The result is a beautiful synergy of sound and movement, a passionate, romantic art form that any visitor to Spain should see for themselves!

Spain is a unique melting pot of cultural influences. You can feel this amalgamation in Spain’s music, architecture, and cuisine, making it one of the most fun and fascinating countries to explore!

Best of Spain and Portugal

Treasures of Spain, Portugal and Morocco 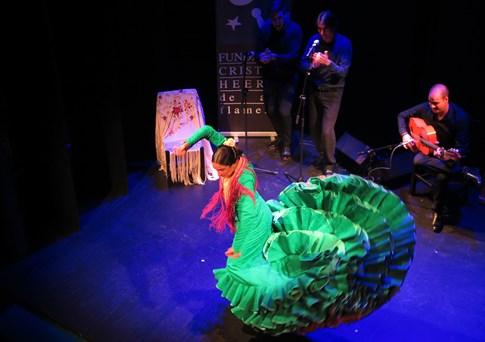 The Cristina Heeren Foundation of Flamenco Art is a private, non-profit entity, created in 1993 in Seville by Cristina Heeren, the Hispanist-American patron. Its aims are the promotion, the teaching, and the conservation of flamenco both in Andalusia and Spain, as well as internationally. The TreadRight Foundation sponsors four scholarships for advanced students of guitar, singing, and dance at the foundation.

We are committed to responsible travel to protect People, Planet & Wildlife. #MakeTravelMatter

From Carnival to dance competitions

There's more to it than steps!